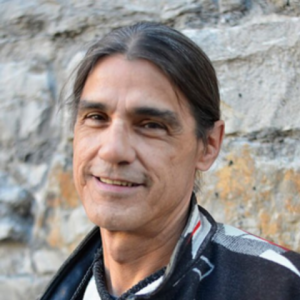 Doug Dokis is a member of the Dokis Anishinabek Nation in northern Ontario. Mr. Dokis has over 25 years’ working for, and advocating on behalf of Indigenous peoples in numerous private, corporate and public sector roles. His primary focus has been on developing and advancing programming in support of improving Indigenous educational outcomes.

Doug believes strongly that Indigenous people’s knowledge has much to offer Canadian society. It is through this belief that he has worked towards greater cross-cultural understanding that draws from the best of the two knowledge systems. Working within the education system for the past 25 years as a teacher, Senior Administrator, Cultural advisor, and in program and curriculum development, Mr. Dokis has worked with many strategic partners at the national level to bring about systemic change.

For the past 8 years, he has been the Director for the National InSTEM (Indigenous youth in STEM) program at Actua, a national charitable organization delivering STEM education to over 35,000 Indigenous youth annually.

As Director, Mr. Dokis is the main point of contact for the 41 University network member programs on their local initiatives, Indigenous organization partnerships, Indigenous community relations, and in the development and delivery of STEM programming for Indigenous youth. Under Doug’s leadership Actua has developed a for credit InSTEM schools’ land-based program that is grounded in the knowledge that “Indigenous People Have Always Know About STEM” Doug’s knowledge of Indigenous Land based learning and STEM education has led to the development of a successful Indigenous STEM program across the country in numerous Indigenous communities. Most recently, Doug coordinated 8 regional roundtables and a national forum with Indigenous thought leaders and education authorities from across the country to discuss a path forward towards systemic change in Indigenous STEM education.

In the spirit of respect, reciprocity and truth, we honour and acknowledge Moh’kinsstis, and the traditional Treaty 7 territory and oral practices of the Blackfoot confederacy: Siksika, Kainai, Piikani, as well as the Îyâxe Nakoda and Tsuut’ina nations. We acknowledge that this territory is home to the Métis Nation of Alberta, Region 3 within the historical Northwest Métis homeland. Finally, we acknowledge all Nations – Indigenous and non – who live, work and play on this land, and who honour and celebrate this territory.